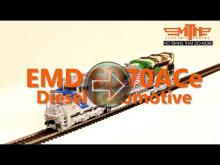 January 29, 2020 - On October 19, 2017, the Union Pacific Railroad revealed a commemorative locomotive honoring the U.S. Armed Forces at San Antonio's Sunset Station. UP's No. 1943 will kick off the railroads Salute to the Military Tour with a series of community displays across Union Pacific's network.

The locomotive's unique livery is based on the schemes and colors from each branch of the U.S. Military and is a recognition on the railroad's part of the military service of many Union Pacific employees. In fact, 17 percent of UP employees have served in the military - one of the reasons the Union Pacific has been recognized in the Best Companies for Veterans Top 10 list the last two years running.

M.T.H. Electric Trains will be releasing the Union Pacific Spirit SD70ACe in cab No. 1943 in HO Scale in both a DCC-Ready version and a Proto-Sound 3.0 28-Function DCC equipped version. Each will be offered with a series of freight cars decorated in the colors and logos of each Military branch. An additional car will also be featured in POW livery as a nod to Union Pacific's inclusion of the POW/MIA symbol at the rear of the locomotive.