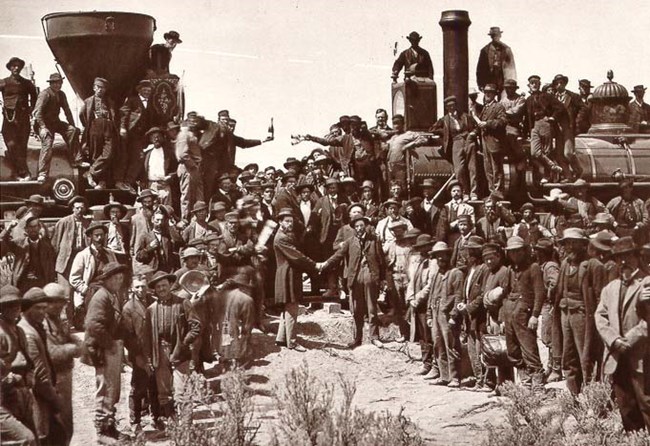 Welcome to the first post of our new M.T.H. blog. This is frankly an experiment, something that we hope will offer new points of view and enhance and broaden your enjoyment of our products and our hobby in general. We hope you’ll come along for the ride and let us know what you think.

This week we’re doing something that I’ve wanted to do for a long time. I’ve been an O Gauge model railroader for decades, but — like many of you, I imagine — experienced real trains largely from afar, through books, magazines and the web. Now I’m on my way to Ogden, Utah for the 150th anniversary celebration of the Golden Spike, the completion of the first transcontinental railroad. Most exciting, I’m going to Jurassic Park for Locomotives: something that we’ve only seen mounted and stuffed in museums is being brought back to life — Union Pacific Big Boy No. 4014. It’s been 60 years since anyone has experienced the sights and sounds of a Big Boy hauling tonnage, and I can’t wait to see a magnificent, once-thought-extinct beast roaming the rails again.

As this is written, 4014 is double-heading from the Union Pacific steam shops in Cheyenne, Wyoming with UP Northern 844. UP has published a schedule for the train, and I’m hoping to meet the train on its way to Ogden, Utah and film it at track speed and share that with you. I’m arriving on Tuesday to scout a location to meet 4014 on Wednesday morning north of Ogden. The weather both days is predicted to be iffy, with some rain, so this should be interesting!

Thursday morning 4014 and 844 will touch noses at Ogden Union Station, recreating a version of the famous Golden Spike “champagne photo.” On Friday, the actual 150th anniversary, a similar event takes place at the National Park Service’s Golden Spike historical site, with recreations of the original engines, UP No. 119 and Central Pacific’s Jupiter. While both events will be live-streamed, I’m hoping to give you another point of view in this blog. So come along and join us, and we’ll see how it goes!

In the meantime, you can check out the two RailKing O Gauge 4-4-0 Steam Engines below in original Central Pacific and Union Pacific dress.  Both are currently slated for delivery this Summer so you'll be able to recreate your own version of the original champagne meetup!