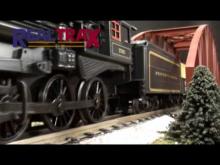 Not all O Gauge track is the same A more important difference between the two track systems is the sharpness or diameter of the O-27 curve when compared to that of O Gauge. The sharpest O-27 curve measures 27" in diameter compared to the sharpest O Gauge curve which is 31" in diameter. Each track system also has wider curves though a greater variety of the wider curve sizes lies in the O Gauge systems. O-27 features 42" and 54" diameter curves while O Gauge includes those sizes as well as 72", 82", 96" and in some systems even wider curves.

Locomotives designed to operate on a 42" curve cannot operate on 31" or 27". The minimum curve size is just that, the minimum sharpness of curve the train can negotiate without derailing. Trains can always operate on curves wider than their minimum recommendation.