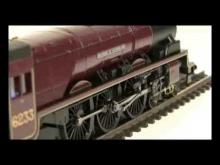 April 29, 2008 - In the years before World War II, Londoners had at least two ways to get to Scotland in style. From Kings Cross, one could speed up the East Coast main to Edinburgh on the LNER's Flying Scotsman, behind one of Nigel Gresley's handsome Pacifics - perhaps a streamlined A4 or maybe an older, apple-green A3. Or one could depart instead from Euston station on the LMS and fly northward to Glasgow on the Coronation Scot or the Royal Scot behind the most powerful steam locomotives in the land, William Stanier's Princess Coronation Class 4-6-2's.

While the London, Midland & Scottish was the largest of England's four major railways, its motive power department had been hobbled by internal rivalries, a legacy from the several railways that combined in 1923 to form the LMS. Locomotive designer William Stanier, with a direct line to the president of the railroad, was hired in 1932 to resolve those problems. He brought the LMS from an also-ran to a leader in British engine design. Stanier's crowning achievement was the four-cylinder Princess Coronation Class Pacifics, built from 1937-1948. In contrast with American designers, who generally shunned engines with more than two cylinders as being too hard to maintain, Europeans often used three or four cylinders to produce a more balanced engine that was easier on the track. In Stanier's design, the Walschaert's valve gear on the outside cylinders also drove the valves on the inside cylinders, located within the frame, through a set of rocker arms.

To Stanier's chagrin, the first examples of the class wore a streamlined shroud to match the Coronation Scot train they were designed to haul. Variously described as an upside-down bathtub or a sausage, the streamlining was omitted on later engines in the class, revealing muscular lines that looked particularly handsome in LMS crimson lake livery with gilt lining. In the British tradition, all of these passenger engines were named. No. 6234, Duchess of Abercorn, set an all-time record for British steam when she recorded 3,300 horsepower in February 1939.

Relive the glory days of LMS express passenger service with our superbly detailed Princess Coronation Class Pacific, complete with sounds recorded from the prototype Duchess of Sutherland, synchronized puffing smoke with a correct eight chuffs per driver revolution, and station sounds for the Royal Scot.

Learn more about it: search on the item number for this model on the M.T.H. Web site for links to additional information on this locomotive and prototype British railroading.

Learn More About It!

Check out the following links for additional information on this engine and British railways in general:

The London & North Eastern Railway (LNER) Encyclopedia: info on a chief competitor to the LMS, with articles on locomotive designers including Sir William Stanier, designer of the Princess Coronation Class 4-6-2