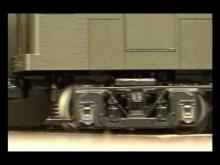 The latest M.T.H. time machine has just arrived at your local hobby shop. Relive the New York of the mid-twentieth century, the era immortalized in the Frank Sinatra/Gene Kelly musical On the Town, with our authentic replica of the Brooklyn-Manhattan Transit Corporationﾒs Q-Type El cars.

Check out the detail level on these cars and youﾒll find it hard to believe theyﾒre RailKing transit cars, not more expensive Premier models. Our models replicate the composite wood and steel construction and clerestory roof of the original cars. Features include lighted, detailed interiors; directional headlights on the powered car; and different trucks for the center and end cars in each three-car set. Car-end details include windshield wipers, safety gates, safety tread on the floor, door handles, and (unlighted) roof lanterns.

Designed for tight-radius turns like the prototype, our Q-Types will negotiate O-31 curves. The powered car is equipped with a remotely-operable Proto-Coupler on each end, while trailing cars are supplied with dummy couplers for closer coupling between cars. A spare dummy coupler is supplied for operators wishing to have close coupling at the rear of the powered unit. Although these RailKing sets do not include passenger figures, interiors are easily accessible for modelers wishing to populate their cars.

The Q-type is offered in two paint schemes: the original blue and orange scheme the cars wore on the Flushing Line for the 1939-40 Worldﾒs Fair and the dark green they wore later in life on the IRTﾒs Third Avenue El.

In the late 1930s, the Brooklyn-Manhattan Transit Corporation rebuilt 90 turn-of-the-century wooden elevated cars for service to the 1939-40 Worldﾒs Fair. Steel ends replaced the original open wood platforms and the BMT shops installed new doors and control systems. The cars were semi-permanently coupled into three-car sets, with two motorized units flanking an unpowered trailer. Bright blue and orange ﾓWorldﾒs Fairﾔ colors adorned their sides and ends, and roofs were a bright silver. The Q (for ﾓQueensﾔ) cars served on the Flushing Line until 1949 and the following year began a new career on the Third Avenue Elevated. Because they were too heavy for the elﾒs older, local tracks, they ran only as expresses. Ironically, the BMT Q-types were among the last cars running on the last IRT elevated line in Manhattan, when the Third Avenue El ceased Manhattan operations in 1955.

Like the proverbial phoenix, the cars ﾗ now more than half a century old ﾗ began yet another life in 1957, on the Myrtle Avenue Elevated back in Brooklyn. Tight clearances on the Myrtle Avenue line required the lowering of the carsﾒ handsome clerestory roofs. When the Q-Types were finally retired in 1969 with the closure of much of the Myrtle Avenue line, the oldest cars had been in continuous service for 66 years ﾗ the longest career of any New York City transit car. Today you can see a preserved Q-Type in its original Worldﾒs Fair colors in the New York Transit Museum, the only rail museum in America located in a former subway station.

The RailKing Q-Type El cars feature transit stop simulation available only from M.T.H. Designed specifically for our municipal transit cars, the unique Proto-Soundﾮ 2.0 transit program features Station Stop Proto-Effects, allowing you to program the train to stop automatically at designated station stops, even in Conventional Mode. When configured to run on automatic, the Q-Type stops itself at locations you choose and calls out station names that you select in advance; the train essentially runs itself. And when you program the Q-Type for an out-and-back route, it even reverses itself and heads back downtown when it reaches the end of the line ﾗ stopping along the way at each station to broadcast the name of the stop and the hustle and bustle of passengers coming and going.

Hop on board this latest M.T.H. transit set at your dealerﾒs now. Itﾒll transport you back to the Big Apple a half-century ago. For more information on the Q-Type and the entire New York City transit system, visit www.nycsubway.org.

The Q Type Subway is available in two schemes including 3rd Avenue El scheme as seen in the detail photos below.