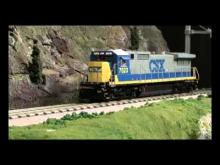 September 10, 2008 - This superbly detailed O Scale replica of the Dash 8 model found its real life niche in high-speed intermodal service. Like its prototype, this model is a perfect choice to power the hottest trains on your railroad and features the extraordinary detail you've come to expect in a Premier locomotive, plus all the features that make Proto-Sound 2.0 locomotives more fun to operate than any other engines in model railroading - including exhaust smoke with variable intensity; CD-quality sound; and Proto-Speed control for smooth pulling power at any speed from 3 mph to full throttle.

In the late 1980s, as General Electric and General Motorsﾒ Electro-Motive Division engaged in heated competition (that continues today) for market share in the high horsepower category, GE announced its Dash 8 line of diesel locomotives. Although the first demonstrator version had only 3,200 hp, most of the Dash-8s had 4,000 hp when delivered and were therefore designated Dash 8-40. Because GE builds its diesel locomotives in five modules, it was able to customize its Dash 8s for each buyer to an unusual degree. Some railroads ordered their Dash 8s with conventional cabs, while others opted for the wider North American or comfort cabs, identified by a ﾓWﾔ in the engine name. Some Dash 8s have 4-wheel trucks ﾗ denoted with a ﾓBﾔ ﾗ while a Dash 8-40C has 6-wheel trucks. This variety meant that these diesels, which were designed for fast freight duty, also found a home in Amtrak passenger service. Despite their many differences, all Dash 8s share microprocessor control. The microprocessor, a small computer, regulates rpm, fuel injection volume, generator excitation, and many other operational features to make the Dash 8s run more efficiently than any diesels before them.

Equipped with Proto-Scale 3-2, the Dash-8 can be purchased with scale or hi-rail wheels. Regardless of which version you choose, either can be quickly configured for operation on 2 or 3-rail track and powered by AC or DC power supplies. The scale wheeled versions feature fixed pilots and longer pilot handrails for an even more authentic look. The unique Proto-Scale 3-2 truck block can be quickly accessed from its bottom so that the scale wheel sets can be replaced with hi-rail wheel sets for those operators interested in running the engine on tubular track while retaining the more realistic fixed pilot appearance.