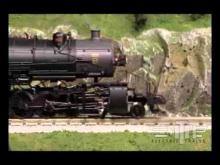 So just what is a Quillable Whistle?

Real engineers pulled on a whistle cord to blow their whistles and DCS puts that same power in your hand in a variety of methods. Since DCS' release in 2002, a simple push of the remote's white whistle button activated an engine's whistle. The longer the button is held down, the more different the ending of the whistle.

With the release of the Triplex, you can now ﾓPlayﾔ your steam whistle by rolling the thumbwheel up and down on the DCS handheld. The affect allows the whistle's different chimes to sound and gives the operator an infinite number of signature whistles, just like a real engineer.

Check out the Triplex in Jill's latest DCS Update

Activation of the Quillable Whistle feature is simple. Simply locate the softkey called SPW and press the key to acivate the feature. You'll notice that the DCS screen changes from displaying the engine's speed to displaying WHISTLE instead. Now, when you roll the thumbwheel up and down, the whistle will play and the tone of the whistle will change as the thumbwheel is moved.

P. T. Barnum would have loved the Triplex. It was an engine of superlatives: more drivers than anything before or since, too big for the shops of its owner, the Erie Railroad, powerful enough to pull a train nearly five miles long. Ninety years ago, in the days before multiple-unit control allowed one throttle to control several locomotives, the Triplex was the ultimate attempt to put as much power as possible in the hands of a single engineer. In the end, it proved a noble, flamboyant, but less-than-successful experiment.
Baldwin Locomotive Works built three triplexes between 1914 and 1916 for pusher service on the Erie Railroad's daunting Susquehanna Hill (also known as Gulf Summit) near Deposit, N.Y. The cylinders of the Triplex's middle engine were powered by high pressure steam direct from the boiler, while the front and rear engines used low pressure steam exhausted from the middle cylinders.

Each triplex replaced three ordinary helper engines, and the new locomotives worked well enough to stay on the Erie roster for more than a decade. But the design proved a bit over the top and only one more Triplex was ever built, for the Virginian Railway. Even with their huge boilers, the locomotives could only make enough steam to go 10 mph. One reason was poor draft in the firebox, because only the front cylinders exhausted through the smokebox and created draft; the rear cylinders exhausted through a separate smokestack on the tender. Another inherent problem with the design was that traction from the rear engine decreased as the boiler used coal and water and the tender got lighter.

M.T.H. Electric Trains will be shipping the Triplex in late October. Featuring all of the craftsmanship and detail that make an M.T.H. steam locomotive the industry's best value, M.T.H.'s Premier Line O Scale locomotives are our top-of-the-line steamers and include features unmatched in the industry.