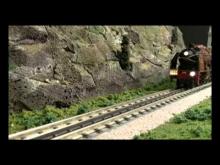 October 8, 2008 - Take a look at an early, undecorated pre-production sample of the Premier Line Orient Express steam locomotive and see for yourself how M.T.H. incorporates a wide variety of add-on cast brass parts to many of our steam locomotives.

In the late 1800s, train travel across Europe was a messy affair. At each national border, passengers got off one train, walked across the border, and climbed aboard another. Like George Pullman in the United States, Belgian George Nagelmackers dreamed of something better: a rolling hotel in which travelers could sleep, eat, and relax from one end of their journey to the other. In 1883, the Orient Express made the dream a reality: a single train from Paris to Romania (and within a few years, from Paris to Istanbul), with rolling stock supplied by Nagelmackers' Compagnie Internationale des Wagons-Lits et Grandes Express Europeens ("wagon-lit" being French for sleeping car). Only the locomotives were changed as the Orient Express rolled across no less than seven national borders on its three-day journey.

By incorporating separate add-on parts to the die-cast metal boiler and tender, we ensure that each Premier Line model features the intricate detail and attention to accuracy today's scale modeler demands. In the case of the Orient Express, there are nearly 60 add-on parts found on the tender and more than 200 on the boiler!

M.T.H. Electric Trains will be shipping the Express in late 2008. Featuring all of the craftsmanship and detail that make an M.T.H. steam locomotive the industry's best value, M.T.H.'s Premier Line O Scale locomotives are our top-of-the-line steamers and include features unmatched in the industry.