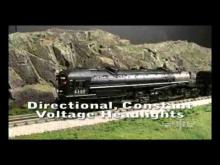 October 29, 2008 - Prompted by the large number of inquiries we've received regarding the Southern Pacific Cab Forward steam locomotive we ran on our 28' operating display at the York TCA show earlier this month, this week's E-Newsletter will spotlight the Premier Line AC-6 Cab Forward released earlier this Fall.

The first true Southern Pacific Cab Forwards were delivered in March of 1910 and proved so successful that the SP eventually bought 254 more in various classes. Because the firebox and tender were at opposite ends of the locomotive, the cab forwards burned oil, piped under pressure from the tender to the firebox. The cab in front gave the engineer the best forward visibility of any steam locomotive.

Part of the first transcontinental railroad, the Southern Pacific's passage over the Sierra Nevadas, from Sparks, Nevada to Roseville, California, has always been a challenge for man and machine. Grades in both directions approximate 2.5%. Thirty-nine tunnels and nearly 40 miles of snow sheds protect the track from snowdrifts and avalanches - Sierra Nevada, after all, is Spanish for "snow covered." Seeking more muscle for this route, the SP took delivery of two Baldwin articulated 2-8-8-2s in 1908. Initial trails, however, revealed that heat and exhaust gases in the tunnels and snowsheds made life nearly unbearable for the engine crew. Although cab forwards had been tried before in Italy and northern California, legend has it the SP cab forwards were inspired by an engineer who turned a Baldwin articulated around and ran it tender-first, putting the smoke behind him so he could breathe while he did his job.

The AC-6 Cab Forward returns to the Premier lineup in 2008, offered for the first time with Proto-Sound 2.0 and upgraded with additional details, including legible builder's plates, painted backhead gauges, cab interior light, tender truck safety chains, and additional boiler details.* While many railfans are familiar with the AC-12 Cab Forward preserved at the California State Railroad Museum - the last new steam engine delivered to the Southern Pacific in 1944 - our model depicts the earlier AC-6 with its distinctive flat cab front and rounded Vanderbilt tender. Delivered in 1930-31, the AC-6 class set the pattern for all future Cab Forwards, with higher boiler pressure, more tractive effort, and the air compressors moved to the boiler front for better weight distribution. Several AC-6s were later modernized with a tapered cab front, and that version is also offered here for the first time.

Featuring all of the craftsmanship and detail that make an M.T.H. steam locomotive the industry's best value, M.T.H.'s Premier Line O Scale locomotives are our top-of-the-line steamers and include features unmatched in the industry. By incorporating separate add-on parts to the die-cast metal boiler and tender, we ensure that each Premier Line model features the intricate detail and attention to accuracy today's scale modeler demands.

The M.T.H. Premier Line Cab Forward locomotives and Speciality Set can be ordered through any M.T.H. Authorized Retailer.