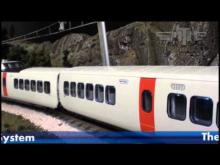 November 19, 2008 - On April 4, 1934, America's first streamlined, diesel-powered passenger train rolled out of the Edward G. Budd plant in Philadelphia. Revolutionary in almost every way, the little 3-car Burlington Zephyr was a collaboration between three partners who each had something to prove. It would turn out to be a perfect publicity vehicle for each of them.

Check out the set in Taylor's Product Update by clicking on the See Video link to the left of the story.

Ralph Budd, president of the Chicago Burlington & Quincy Railroad (and no relation to the Budd Company), needed to prove to Depression-weary passengers that train travel could be modern and exciting. He also wanted an economical train for, as he put it, "situations where a train had to be operated but where earnings were insufficient for any profit." The Budd company, armed with a patented process for welding stainless steel to make vehicle bodies, had been successful in the automotive and aircraft industries and was looking for a foothold in the railroad business. General Motors, having recently purchased the Electro-Motive Company and the Winton Engine Company, was looking to prove the viability of its new diesel engines.

The lead designer in realizing Ralph Budd's dream was Albert Dean, an aeronautical engineer who came to the Budd company fresh out of college. The Zephyr borrowed many features from aircraft design, including a fully enclosed underbody for lower drag, and Dean tested his design in the wind tunnel at his alma mater, MIT. Radical at the time, the Zephyr's unpainted stainless steel exterior would become a hallmark of streamlined passenger trains, as would its lightweight design. The entire 3-car Zephyr, locomotive and all, weighed about the same as a single Pullman coach of the time. And it was fast. Fresh out of the factory, it was clocked at 104 mph.

Headlines and the Silver Screen

Budd was determined to get the maximum publicity value out of his gleaming experiment before it settled into daily service. Between April and November, the train visited 222 cities and hosted over two million visitors. In the depths of the Great Depression, the Zephyr was a futuristic, shiny symbol of hope. Everything about the train was bright and lightweight, compared with the dark and heavy materials used on trains of the time; the "heavyweight" look, which had symbolized richness and luxury in the twenties, now seemed a bit dark and depressing - like the state of the nation.

On May 26, 1934, the Burlington staged a non-stop "Dawn to Dusk" run from Denver to Chicago that made headlines throughout the nation. "Ushering in a new era in railroad history, the Burlington's streamline train, the Zephyr, arrived in Chicago from Denver tonight at the end of the longest and fastest run in railroad history," reported the New York Times. "In spanning a third of the continent, the Zephyr's speed at times reached 112 ﾽ miles an hour." Fresh from its record run, the Zephyr went to the Chicago World's Fair and then to Hollywood to star in its own movie, Silver Streak - where it rushed an iron lung across the country to save a railroad president's son from polio.

While the movie was a bomb, the Zephyr was not. On its Lincoln - Omaha - Kansas City route, traffic increased 150%. Crowds turned out to ride the train and just to see it. Within a year, a fourth car was added and still the Zephyr was frequently sold out.

Romance Lives Again Along the Mississippi

Almost immediately, the Zephyr's success spurred the Burlington to order a fleet of similar trains. Designed for the 221-mile route from St. Louis to Burlington, Iowa, the fourth Zephyr ran through Samuel L. Clemens' boyhood home of Hannibal, Missouri, and was appropriately named the Mark Twain Zephyr. Its inauguration in 1935 was the high point in Hannibal's year-long centennial celebration of its favorite son's birth. And again Ralph Budd's publicity machine went into overdrive. "Romance Lives Again Along the Mississippi" trumpeted a Burlington poster. On October 23 the MTZ set a new speed record of 122 mph; in Hannibal the next day, Clemens' granddaughter Nina Gabrilowitsch christened the new train in front of 10,000 people, including then-Senator Harry S. Truman. CBS Radio broadcast the ceremony nationwide. Like the original Zephyr (now renamed the Pioneer Zephyr to distinguish it from its brethren), the MTZ was a tremendous hit with passengers. A decade later, Hannibal turned out again to celebrate the train's tenth anniversary.

While the Zephyrs' diesel power and lightweight, streamlined construction set the standard for the next generation of passenger trains, other aspects of its design were less successful. Their "shovelnose" cab design was dangerous in a collision and their semi-permanently coupled, articulated trainsets could not adapt to changing passenger loads. As a result, only one other railroad ordered a copy of the Zephyrs. On February 10, 1935, the Boston and Maine (which also managed the Maine Central) took delivery of the 3-car Flying Yankee. Following the Ralph Budd publicity model, the Yankee barnstormed over the B&M-MEC system for weeks, attracting huge crowds. The train's initial assignment was a grueling 6-day-a-week, 750-miles-per-day route from Portland, Maine to Boston to Portland to Bangor to Portland to Boston and back to Portland for the night. Like the Zephyrs, the Yankee proved both profitable and dependable, racking up 2.7 million miles in 22 years of service - before being replaced by another silver Budd-built pioneer, the RDC.

Learn More About It

The restored original Zephyr is the centerpiece of "All Aboard the Silver Streak," a marvelous exhibit at the Museum of Science and Industry in Chicago. Currently undergoing a multi-year restoration to make it operable again, the Flying Yankee can be found at www.flyingyankee.com. Sadly, the Mark Twain Zephyr rests unrestored today in Joliet, Illinois, looking for a buyer; learn more about its history at www.gatewaynmra.org and at www.hannibal.lib.mo.us.

The Rocky Mountain News, a Denver newspaper, offered the Burlington a "Rocky Mountain Canary" as a mascot for the Zephyr's Dawn to Dusk speed record attempt. Only after accepting the offer did the railroad discover that a Rocky Mountain Canary was a burro, not a bird. Railroad officials hastily ordered a supply of hay, nicknamed their new mascot "Zeph," and stuffed him on the train. Asked for a comment, Burlington president Ralph Budd quipped, "Why not? One more jackass on this trip won't make a difference."

In addition to a gleaming chrome finish, M.T.H.'s O Gauge Zephyrs will feature new details to more closely match the mid-1930s originals, including a single headlight rather than the later dual headlamp used on our previous model. Illuminated front and rear marker lights, smoke from four exhaust stacks, crew and passenger figures, and improved engine sounds and station announcements are among the models' other features.

WHERE TO BUY
The M.T.H. Premier Line Zephyrs can be ordered through any M.T.H. Authorized Retailer.