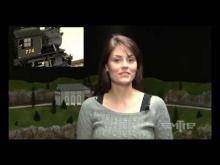 February 11, 2009 - M.T.H.'s Premier Mother Hubbard replicates the Central Railroad of New Jersey's Class L8s 780-series 4-6-0s, the Jersey Central's final group of camelbacks. Although not a favorite of crews, these 1918 Baldwin products were remarkably long-lived workhorses, serving as fast freight and later as commuter engines until the end of steam in 1954.

<-- Check out the locomotive in Taylor's Product Update

Coal is coal, right? Not exactly. Early steam engines burned wood in part because the common coal of the time, rock-hard anthracite, burned too slow for use in locomotives. The discovery of vast reserves of softer, faster-burning bituminous coal in the mid-1800s began the switch to coal as American's primary locomotive fuel. Anthracite, meanwhile, which burns with a smaller flame and little smoke, gained widespread use for home heating.

But one characteristic of anthracite mining was that close to 20% of production wound up as finely-ground, low-quality waste, or culm, that accumulated in huge heaps outside the mines. In the 1870s, John E. Wooten of the Philadelphia & Reading Rail Road determined to explore the potential of culm as a cheap locomotive fuel. The result was the Wooten firebox, based on a large grate, or firebox floor, two to three times the size of a conventional grate and burning culm in a very thin layer. Whereas most engines of the time had a narrow firebox placed between the rear drivers, the Wooten firebox extended out over the drivers and was as wide as clearances allowed. This, of course, made space in the cab rather tight, and designers soon moved the cab forward and placed it over the boiler barrel, which was smaller in diameter than the Wooten firebox. The result was the Camelback or "Mother Hubbard" style of locomotive, with the engineer in the cab and the fireman back on the tender deck shoveling culm into the rear of the engine. By the late 1800s more than 40 roads rostered Mother Hubbards; among the largest users were the New York Ontario & Western, the Jersey Central, and its parent the Reading.

As opposed to a normal locomotive where "engineer, fireman, and controls were simply three parts of one thing," British author Brian Reed noted in Locomotives in Profile that "Firing a Mother Hubbard was no kind of job at all. The tallow-pot [fireman] was alone, and he had almost no range of vision. He could see the driving cab and the line ahead only if he hung well out sideways, and ﾅ it was difficult for him to determine if there was anything wrong in the cabﾅ With the tender bucketing along behind the engine with a most decided motion of its own, he had to shovel up to two tons of culm an hour from one vehicle to another."

The engineer didn't have it much better. He was squeezed up against the hot boiler with the controls alongside him, rather than spread across the backhead as on a normal steamer. "Side rods breaking beneath his feet were even more disastrous than a fracture in a normal engine, and there was much less chance of living to tell the tale in the enginemen's bunk house." No wonder that safety concerns led the Interstate Commerce Commission to ban the construction of new Mother Hubbards in 1918.