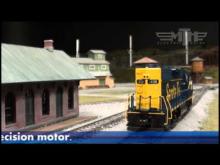 January 23, 2013 - M.T.H. HO GP35 Diesel Locomotives have begun shipping to M.T.H. Authorized Retailers. Available in three different locomotive configurations in eight different paint schemes, these locomotives follow on the footsteps of our HO SD70ACe diesels, sporting the same features and functions that have established M.T.H. as a leading HO manufacturer. Check out the locomotive's details in the photos below or click on the video icon to the left to see it in action.

Produced from 1963 to 1966, the GP35, along with its six-axle SD35 sibling, marked both an end and a beginning. They were the last road diesels to use the EMD 567 motor that had powered switchers, F-units, and Geeps since 1939 (so named because each cylinder displaced 567 cubic inches). For the horsepower race of the 1960s, EMD tweaked the 567 to a turbocharged V-16 delivering 2500 hp. That was it for the 567, however, and in 1966 the baton was passed to the more powerful model 645. But while the "35 line" diesels ushered out an old motor, they inaugurated a new look. Their angled cab roofs and the clean, squared-off lines of their car bodies established the look of EMD power for the next three decades.

Introduced to compete with General Electric's landmark U25B, which had ushered in the second generation of diesel power, the GP35 outsold the "U-Boat" nearly three to one. There was a strong market for new power in the mid-1960s because the first-generation diesels that had vanquished steam were wearing out. While first-generation rosters had often been a hodgepodge of manufacturers and models as railroads experimented with the new technology, by 1960 Alco, EMD, and GE were the only manufacturers left standing - and Alco would soon throw in the towel. As a result, virtually every major U.S. railroad became a GP35 customer and over 1300 engines were sold in the United States, Canada, and Mexico.

In what we believe is the finest, ready-to-run HO GP-35 diesel to ever be produced, HO modelers will find the best combination of detail, realism, and performance of any 1/87 scale GP35. Added-on detail parts include windshield wipers, metal see-thru body grilles, lift rings, metal grab irons and handrails, see-thru rooftop fan housings, and brake cylinders, air pipes, and swing hangers on our super-detailed Blomberg trucks.

Our highly detailed model includes a broader range of features than you’ll find on any other HO scale diesel, including lighted number boards; smooth performance from a three-scale-mile-per-hour crawl to full throttle; “cruise control” for steady speeds regardless of curves, switches and grades; built-in decoders for DCC and the M.T.H. DCS Digital Command System; and a full range of sounds recorded from a prototype GP35. If you’re looking for durable motive power that’s accurately detailed, smooth running, and a great deal of fun to operate, it doesn’t get any better than this.