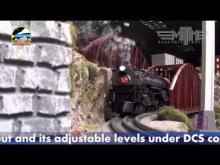 M.T.H. Premier Line Pennsy 2-10-4 steam locomotives have begun shipping to M.T.H. Authorized Retailers. check out the engine in action by clicking on the video link to the left or the Youtube link below. December 31, 2013 - The J1 was the Pennsy's War Baby, conceived and born to move freight for World War II. Like most American railroads, the Pennsylvania found itself short of motive power when traffic ramped up for the war. The Pennsy would have preferred to design its own modern steam loco, but the War Production Board declared otherwise. Only existing, proven designs would be authorized for wartime construction. In retrospect, that was probably a good thing, because none of the Pennsy's postwar steam designs came close to the success of the J1. For its war baby, the Pennsylvania chose a design created twelve years earlier by Lima for the Chesapeake & Ohio. The C&O T1 2-10-4 possessed the key attribute of a modern "super-power" locomotive: power at speed. Home-built in the Juniata shops from 1942 to 1944, the Pennsy's 125 copies, designated classes J1 and J1a, were quickly recognized by Pennsy faithful as among of the best steamers produced in the modern era. They were at home anywhere west of Altoona, pounding up heavy grades or flying along level stretches. Being based on another road's design, they possessed two distinctively un-Pennsy features - a booster engine and a radial-stay rather than Belpaire firebox. However, their builders managed to give the J's a look all their own, with a substantial Pennsy cast pilot, streamlined cab windows, and a single massive dome that served as both sandbox and steam dome. Viewed from trackside at speed, the J's were the epitome of high, wide, and handsome. Outfitted with Proto-Sound 3.0, the 2-10-4s are available in both 2- and 3-rail versions, each equipped with Proto-Scale 3-2™, which allows the user to quickly convert either version for operation on 2- or 3-rail track. Did you know? In the summer of 1956, a motive power shortage led the Pennsy to lease a dozen of the Santa Fe's 5000-series 2-10-4s. The huge oil burners were put to work hauling coal from Columbus to Sandusky, Ohio. Pennsy crews liked them for their easy steaming and good riding qualities.