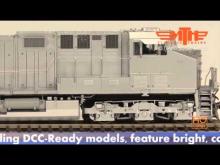 M.T.H. HO ES44 Diesel locomotives are featured in the 2014 HO Catalog. Check out this undecorated version of the GEVO with it's flashing charging lights in action by clicking on the video link to the left or the Youtube link below. February 4, 2014 - With a wave of consolidation behind it, North American railroading is once again a good business to be in. Freight traffic is booming and locomotive orders are coming in at a solid pace from the Big Six railroads that dominate rail transportation on the continent. The two remaining diesel builders are locked in a battle to become the locomotive supplier for the 21st century. Caterpillar®-owned EMD, no longer a division of General Motors, is represented by the AC-traction-motored SD70ACe and its DC-traction sibling, the SD70M-2. General Electric’s standard bearers are the EVOs, the Evolution Series ES44AC and ES44DC. At the heart of the Evolution Series is a brand new prime mover, the turbocharged four-cycle, 12-cylinder GEVO-12. While producing the same 4400 horsepower as its 16-cylinder FDL-series predecessor, the GEVO-12 uses less fuel and spits out 40% fewer emissions. Each of its cylinders displaces 950 cubic inches, nearly three times as much as an entire Corvette V-8. GE claims the EVOs are “the most fuel-efficient, most environmentally friendly diesel locomotives in history. If every freight train in North America were pulled by an Evolution Series Locomotive, the reduction of smog-producing pollutants would be like removing 48 million cars from the road each year.” Everything about these locomotives has been examined, questioned, and re-thought, generating 25 new U.S. patents in the process. Before they went on sale in 2005, 52 preproduction units were tested in revenue service across the continent for more than a year. Every Big Six railroad has ponied up to buy the ES44, with the BNSF currently rostering the largest EVO fleet. The undecorated HO model from MTH Electric Trains in this video features the underbody flashing charging lights GE equipped on the GEVO demonstrator model it used to court the Big Six railroads. The charging lights on the prototype were meant to simulate the Prime Movers charging of the traction motors in each of the power trucks. We've recreated the same light motion seen on the actual GEVO Demonstrator prototype. Watch as the lights change direction when the locomotive begins to move. The long lasting LEDs on our model ensure that this unique lighting effect will last for years. Like all M.T.H. locomotives, our new ES44AC offers HO scale’s finest combination of detail, realism, and performance. Listen to the chant of an authentic GEVO-12 motor in the Proto-Sound 3 versions, and throttle down as low as three scale miles per hour so you can admire the details as the Evolution Series glides by: see-through fans and grilles, walkways with safety tread, flashing ditch lights, windshield wipers, body and truck air brake piping, and a host of other separately applied details. In fact, the tooling for our EVO allows us to produce up to four different body specific roadname configurations ensuring a high level of road-specific accuracy.