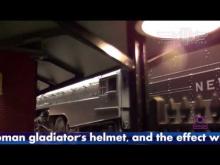 September 3, 2014 - M.T.H.'s Premier Line O Scale New York Central Dreyfuss steam locomotives will be arriving at your local M.T.H. Authorized Retailer in early October 2014. Check out the locomotive's details by clicking the video icon to the left or below to see it in action.

The 1938 edition of the Twentieth Century Limited is often regarded as the high water mark of the American passenger train. Thirty-six years to the day after passengers strode down a red plush carpet to the first run of the Century - inspiring the phrase "red carpet treatment" - the new incarnation of America's most famous train pulled out of Grand Central Station behind a homely boxcab electric. Thirty-three miles later, at Harmon, New York, the train was turned over to a streamlined Hudson with a prow reminiscent of a Roman gladiator's helmet, and the effect was complete. From engine to observation car, in every detail down to the dining car china and matchbook covers, the train had been styled by Henry Dreyfus, a giant in the then-new profession of industrial design. The design was so handsome and striking that it became a symbol of the New York Central railroad and, later, of the entire Art Deco era. Decades later, Time magazine selected the locomotive as its single symbol of the twentieth century.

Advertised as "the first all-room train in America, 16 hours between New York and Chicago," the 1938 Century was the last word in luxury travel. Every afternoon the famous red carpet was unfurled in Grand Central Station, welcoming passengers aboard. Taking aim at Pennsy's rival Broadway Limited, which had to cross the Allegheny Mountains to make the same trip, the New York Central promoted itself as "The Water Level Route… You Can Sleep."

Leading the train was one of the best examples of streamlining ever applied to a locomotive. Unlike Raymond Loewy's design for the Broadway Limited's Pacifics, which largely hid the engine under a streamlined shroud, Dreyfuss' styling clung tightly to the locomotive, glorifying rather than hiding its shape and boldly displaying the wheel and rod motion that make a steam engine so exciting. No wonder the Dreyfus Hudson has been a favorite image of graphic artists ever since.

For our 2014 lineup, M.T.H. brings back the most fun-to-operate O scale model of this landmark locomotive ever made, upgraded with Proto-Sound 3.0. Our Dreyfuss Hudson is offered in several prototypical versions with either the original 1938 paint scheme with blue edging on the stripes, or the cleaner, more simplified 1940 scheme.