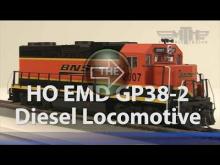 December 15, 2015 - M.T.H. Electric Trains has begun shipping its HO GP38-2 Diesel Locomotive, including all five new roadnames announced earlier this summer. You can learn more about all the offerings by clicking on the brochure link below:

These limited production releases can be ordered through any M.T.H. Authorized Retailer.

Produced from 1972 to 1986, the GP38-2 helped inaugurate Electro-Motive’s “Dash-2” series of locomotives and became one of EMD’s all-time best sellers. With over 2200 engines sold throughout North America, rare was the railroad that did not roster these reliable, second-generation EMD workhorses.

Building on the success of the GP38 introduced in 1966, the Dash-2 model looked almost identical on the outside but incorporated a host of internal upgrades that lowered exhaust emissions and improved reliability, ease of maintenance, and tractive effort. Most significant was the replacement of the maze of hard-wired circuits, switches, interlocks, and relays — which had characterized first-generation diesels and had been the source of many of their service issues — with modular, solid-state electronics. Other improvements toughened the pistons, rings, and bearings of the 2000-horsepower, non-turbocharged model 645 prime mover.

The result was an engine so hard working and dependable that it became as common on American railroads as the F-unit was in the 1950s and ‘60s. Trains magazine recognized this in 1982 by designating B&O GP38 #3802 (a pre-Dash-2 model) as the All American Diesel; the engine resides today in the Baltimore & Ohio Railroad Museum, repainted in its 1982 Chessie System colors. Many GP38-2s have soldiered on for more than three decades and remain in service today on short lines and regional railroads.

This accurately modeled GP38-2 joins our economically priced Ready2Rail lineup in eight prototypical paint schemes. While Ready2Rail locomotives have fewer added-on details than standard M.T.H. motive power, Proto-Sound 3.0 versions feature the same versatile electronics and prototypical sounds found in every Proto-Sound 3.0 engine. In command mode, you can operate this second-generation stalwart with any other DCC- or M.T.H. DCS-equipped models. With the DCS system, you can create a lashup with just a few keystrokes, combining one or more GP38-2s with other Proto-Sound 3.0 first-, second-, or third-generation diesels — and run them all from a single throttle just like the prototype.