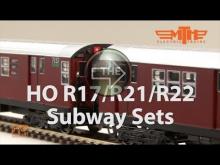 Check out the all-new HO R-22 Subway Sets from M.T.H. Electric Trains along with select R-17 and R-21 sets. The R-22s are the latest HO subway offerings from M.T.H. are the last of the new subway series started by New York's MTA after World War II when the subway system first started using welded steel bodies, fluorescent lighting that made them considerably brighter than prewar cars, and seating made of foam rubber covered with velon, a new plastic material that replaced the rattan seating of older cars.

A major improvement was a new type of brake system known as Straight Air Motor Car Electric-Pneumatic Emergency (SMEE), which combined ordinary air brakes with dynamic braking, in which a car’s electric motors, by having their polarities reversed, were converted to generators in order to slow the car. This significantly reduced brake shoe wear and maintenance costs. Beginning with the R-12, the postwar IRT cars were known as the SMEE fleet.

The 400 cars built under contract R-17 were part of the 1950s expansion of the SMEE fleet, which also included the similar-looking R-15, R-21 and R-22 cars. As was normal practice at the time, the 400 R-17 cars delivered by St. Louis Car Co. in 1955-1956 were evenly split between General Electric and Westinghouse electrical gear, with each company equipping half the cars. The R-17s could be operated independently or with any other SMEE cars, and various SMEE types were often intermixed in trains. Ten of the R-17s were delivered with factory-installed air conditioning. The experiment proved unsuccessful, however, and the AC was later removed. Also removed were the comfortable velon seats, which proved an easy mark for vandals and were replaced by hard fiberglass benches.

You can still ride an R-17 today in New York and Connecticut. Both the New York Transit Museum in Brooklyn and the Shore Line Trolley Museum in East Haven, Connecticut have a restored, operational R-17. In fact, the Shore Line’s Car 6688 appears in the movie The Amazing Spider Man 2. Other film appearances by R-17s include The French Connection, Ron Howard’s Night Shift, and an interior shot in the opening credits of Oliver Stone’s Wall Street.