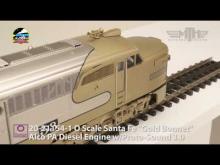 The PA was Alco's glamour girl. While Electro-Motive's E-units easily beat Alco's passenger engine in terms of popularity, the PA is widely regarded as the most beautiful first-generation diesel - period. Perhaps no other locomotive looked so right at the head of the streamlined trains of the late forties and fifties that were the last hurrah of American long-distance passenger service. The 294 PA's and cabless PB's built between 1946 and 1953 powered some of America's most famous name trains, from the Pennsylvania's Broadway Limited to the New Haven's Merchants' Limited.

The muscular PA profile and its elegant nose, with the characteristic grille around the headlight, were designed by Ray Patten, General Electric's head of industrial design. At the time, GE and Alco were partners in the locomotive business, with GE making the electrical equipment for all Alco diesels. Patten's design was described as "a locomotive so distinctive and so powerful looking that it actually helps railroads sell their services to passengers and shippers." Under the hood of the PA beat a 16-cylinder model 244 prime mover that developed 2000 hp. Depending on their gearing, PA's could hustle a passenger consist along at up to 100 mph.

In February of 1960, General Electric had the Santa Fe repaint PA 53 in gold to assist GE in a sales promotion campaign dubbed "Golden Values" that was aimed at the Southern California market. Partnered with a baggage car and three lounge cars - similarly attired with gold trucks - the train moved between Los Angeles, Pasadena, San Bernardino, Fullerton and San Diego during the campaign. Once the promotion concluded, the train's colors were restored to Santa Fe's classic red warbonnet.

Long after all other PA's had gone to scrap, four restored ex-Santa Fe units remained in service on the Delaware & Hudson into the late 1970's. Sold to the Ferrocarriles Nacionales de Mexico (FNM) in 1978, most of the units eventually deteriorated to junk status, although one remained operational. But in April of 2000, Doyle McCormack - who also happens to be the engineer of 4449, the restored Southern Pacific Daylight - and the Smithsonian Institution repatriated two of the junked units for rebuilding.

Recreate the excitement of first-class passenger travel with Premier Alco PA locomotives and matching Premier passenger sets. Our ProtoSound 3.0 sound and control system brings you the authentic sounds of an Alco prime mover and station announcements for name trains of the 1940s and '50s - along with the ability to start your train so gently you won't spill the water in the diner and then accelerate up to scale speeds of over 100 mph, just like the prototype.