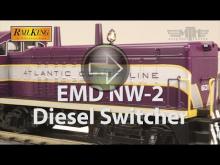 The NW2 was the big brother of the SW1 switcher. With a longer hood the NW2 housed a 12-cylinder diesel, twice as large as the prime mover in the SW1. The “N” in NW2 stood for nine hundred horsepower, the power output of the first Electro-Motive Corporation N-series switchers with Winton motors. Power increased to 1000 hp with the 1939 debut of the NW2, the first N-series locomotive with EMC’s new 567 diesel motor — the prime mover that would power nearly all of the most successful first-generation diesels. Within a few years, EMC and Winton Engine, which had been owned by GM since 1930, would become the Electro-Motive Division of General Motors.

EMD cataloged the NW2 for a decade, except for a hiatus in production from 1942-1945, ordered by the War Production Board. While rival manufacturers were asked to produce switchers, EMD was the only firm allowed to produce road diesels — a situation that, in retrospect, gave GM a commanding lead in the diesel revolution after the war.

By the end of NW2 production in 1949, over 1100 engines had been sold in the United States and Canada, and the hardy N-series switchers were ubiquitous from coast to coast. A popular, near-scale Lionel model ensured the engine was familiar to almost any boy who grew up in the 1950s.

An interesting variation was the “calf.” This cabless version was designed to be run in tandem with a normal NW2 for heavy-duty switching and transfer service between railroad yards. A number of railroads rostered TR2 cow-and-calf combinations, and the Chesapeake & Ohio owned two TR3 “herds” — a cow and two calves.

The NW2 returns to the RailKing lineup in 2018 with everything you need in a hard-working switcher: twin-motored pulling power down to 3 scale miles per hour, dual Proto-Couplers to drop off cars anywhere, and authentic EMD 567 sounds.