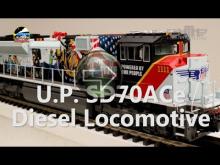 December 31, 2019 - M.T.H. Electric Trains has released another diesel locomotive based on some of the newest paint schemes from the nation's railroads, this time in Union Pacific livery. The Premier Line Union Pacific Powered By Our People SD70ACe Diesel Locomotive is now in-stock and available for immediate delivery from the M.T.H. Online Store or any M.T.H. Authorized Retailer.

In addition to the U.P. Powered By Our People scheme, there are other SD70ACe diesels featured in the 2020 Volume 1 catalog slated for delivery later in 2020. Those locomotives can be ordered from your favorite M.T.H. Authorized Retailer now. Don't miss out as they are sure to sell through quickly. You can see the entire collection by going HERE.

About the SD70ACe Diesel

The SD70ACe is Electro-Motive Division's hope for the future. While designed to meet the Environmental Protection Agency's Tier-2 emissions requirements that took effect on January 1, 2005, this replacement for the SD70MAC also seems to have a higher purpose: to recapture the lead in North American locomotive sales.

Other than the prime mover, however, virtually every element of the SD70ACe has been re-thought to create a 21st century locomotive. Ergonomics were a prime consideration. The engine's angular nose offers the crew far better visibility than most other locomotives, and the cab is comfortable for engineers of almost any size. Digital screens provide a range of information on what is happening both inside the locomotive and out on the road. The cab easily accommodates a crew of three - an important factor in a modern world without cabooses. And there is, of course, a cupholder for the engineer.

The SD70ACe also offers, in EMD's words, "outstanding improvements in maintainability." All electrical wires are on the right side of the locomotive and all piping is on the left, with most pipes and wires routed under the frame so they can be serviced by a man standing outside the engine - rather than crawling around at the bottom of the engine room. The number of electrical components has been drastically reduced while access to the remaining parts has been seriously improved. And the time between service intervals has been doubled, from every three months to every six months.