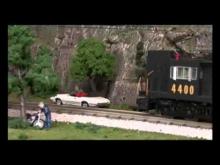 July 30, 2008 - The latest in our series of Pennsylvania Railroad ﾓjuice jacks,ﾔ the brick-like E44 electrics cataloged in 2007 volume 2, will be arriving this Fall at your local M.T.H. Authorized Retailer. The first decorated engineering sample arrived last week and we got our hands on one. Check out these newly-tooled models and we think youﾒll agree theyﾒre terrific replicas of the last hurrah of Pennsy electric power.

Atop the highly detailed ABS body lies a pair of authentic single-arm GE-Faiveley pantographs that can be raised and lowered manually, and even wired to pick up overhead power if desired. Under the hood, twin motors drive all 12 wheels (4 equipped with traction tires), for pulling power to rival the muscular prototype. Thanks to Proto-Sound 2.0 and M.T.H.ﾒs Digitial Command System (DCS), these E44ﾒs can be easily double- or triple-headed like the prototypes often were, and even lashed up with GG1ﾒs, as happened occasionally in emergency situations.

For much of the 1950s, the Pennsylvania Railroad searched for a replacement for its aging fleet of P5a electric freight engines. It even considered pulling down the catenary in favor of dieselization. But, as the railroad announced, ﾓIn May, 1958, the Pennsylvania R.R. initiated three independent studies to evaluate the economic advantages and disadvantages of diesel-electric vs. electric locomotives in the electric territory. Completed in 1959, they unequivocally proclaimed the superiority of electrification.ﾔ

By that time, however, the diesel had virtually wiped out the market for new electric locomotives. General Electric was the only remaining manufacturer of electric power. For what would become its last new electric engines, the Pennsy opted for an upgrade of the 3300 horsepower E33 electrics that GE had built just a few years earlier for the Virginian Railway. The Pennsyﾒs brick-like, six-axle E44 freighters were the same size as the earlier design but developed 4400 hp, a power rating that no single-unit diesel would rival for decades. While previous Pennsy juice jacks had been straight AC ﾗ AC power from the overhead wire was stepped down in voltage and fed to AC traction motors ﾗ the E44s were rectifier engines. Like the Virginian E33s and the New Haven EP-5 ﾓJets,ﾔ the E44s used Ignitron Rectifiers, a new technology for converting AC to DC, enabling the new electrics to use the same DC traction motors used in diesels. While the first 60 E44s were delivered with water-cooled, somewhat delicate ignitron tubes, the final six units were equipped with more rugged and reliable air-cooled, solid-state rectifiers. Most of the earlier engines were later updated.

Delivered between 1960 and 1963, the E44s were often double- or even triple-headed in heavy freight service, and even teamed up occasionally with GG1s ﾖ motive power combinations that can easily be duplicated on any model railroad with M.T.H.ﾒs Digitial Command System (DCS). In the winter of 1966, E44s could also be seen assisting on the head of GG1-powered passenger trains, when fine snow caused the GG1s some electrical problems. The E44 fleet went on to serve a succession of owners, as former Pennsy rails came under the control of the Penn Central and later Conrail. After Conrail electric service ended in 1981, a number of units worked for Amtrak until they were retired; one Amtrak unit resides today at the Railroad Museum of Pennsylvania, restored to its original Pennsy colors.

E44ﾒs were equipped with cast bronze bells from retired Pennsy steamers, hidden in a spot where they could be heard but not seen.

Our first run of this electric freighter is offered in Pennsylvania livery as first-in-class engine 4400 as seen in the detail photos of the pre-production unit below; in Conrail blue; and in a Penn Central set with the Tropicana ﾓJuice Train.ﾔ

The M.T.H. Premier Line E44 Electrics will be available beginning in November in limited quantities. Check with your local M.T.H. Authorized Retailer for ordering details.