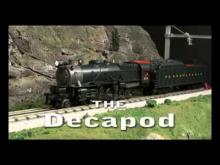 November 26, 2008 - By the 1910s, the Pennsylvania Railroad was hauling coal and ore by the tons, and it sought a more efficient way to do so than double-heading 2-8-2 engines. Thus was born the monstrous I Class 2-10-0 Decapod.

Check out the Decapod in Taylor's latest Product Update:

This huge loke dwarfed all previous 2-10-0s, weighing in at 386,100 pounds, with a power output 41% higher and steam consumption 12% lower than the Mikados that were previously assigned to coal and ore duty. Pennsy heartily approved of the new design and ultimately had the Baldwin and Juniata shops build 598 Class I1s.

These hulking engines were designed specifically for use in the mountainous Allegheny region of western Pennsylvania, and they hauled freight through that area like nothing the Pennsy had seen before. The typical assignment called for two Decapods at each end of every freight train, and despite their enormous size and weight, they were allowed to move at up to fifty miles per hour.

MTH Electric Trains began shipping the decapod last week. Available with both long and short-haul tenders in two cab numbers, this magnificent steam locomotive returns to the RailKing lineup as a member of our Imperial Series. Featuring all of the craftsmanship and detail that make an MTH steam locomotive the industry's best value, Imperial Series locomotives are our top-of-the-line RailKing steamers and include features like real coals and illuminated marker lamps.

WHERE TO BUY
The M.T.H. RailKing Imperial Series Decapod can be ordered through any M.T.H. Authorized Retailer.