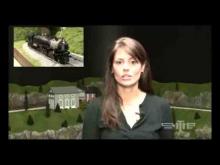 February 18, 2009 - New for 2009, the UP 9000-class joins the other historic locomotives that have graced the M.T.H. HO lineup. Featuring incredibly smooth operation as slow as 3 scale miles per hour and a correct six puffs and chuffs per driver revolution, our die-cast 4-12-2 boasts the wealth of added-on details you expect in an M.T.H. model ﾗ including operating third-cylinder Gresley valve gear on the pilot. You can see the valve gear in action on 22" radius curves in Taylor's latest Product Update VIDEO. For much of the twentieth century, the Union Pacific had a love affair with massive, bigger-than-life locomotives. Some examples, like the Challenger and Big Boy, were great successes, while others like the gas turbines and DD40AX ﾓCentennialﾔ diesel were noble failures. One of the UPﾒs earliest and most successful big engines was the 9000-class 4-12-2, which boasted the longest rigid wheelbase of any American steam locomotive. Designed for fast freight service, the eighty-eight 9000-class engines were built by Alco in 1926-30, during a period when low-speed ﾓdragﾔ freight service ﾗ the norm on American railroads for decades ﾗ was being largely supplanted by freight trains running at passenger speeds. The 9000s could haul a mile-long train at 50 mph, twice the speed of the Mallet articulateds they replaced. Known as a ﾓUnion Pacificﾔ type for their wheel arrangement unique to the U.P., the 9000s were also the most successful three-cylinder rod locomotives ever built in the United States. The third cylinder was placed between the two outside cylinders and drove a rod connected to the second axle, which was shaped like a crankshaft rather than a straight axle. A pair of hinged rods driven off the outer cylinders, and clearly visible on the pilot deck in front of the cylinders, operated the third cylinderﾒs valve gear ﾗ a design borrowed from English locomotives like the Flying Scotsman, and known as Gresley valve gear. The rest of the middle cylinderﾒs machinery, however, was not so visible or accessible, and tended to receive less than the optimal amount of attention from shop crews. Despite the maintenance headaches of the third cylinder, however, the 4-12-2s proved versatile and dependable. When faster and more powerful Challengers and Big Boys replaced them as the UPﾒs premier freight engine, the 9000's became the principal freight power on the Nebraska division, where they served until early 1956. Engine No. 9000 was saved from the scrapper and resides today at the Los Angeles County Fairplex in Pomona, CA. AVAILABLE IN Item No. 80-3152-1 Union Pacific 4-12-2 9000 Steam Engine w/Proto-Sound 3.0 Cab No. 9000 Item No. 80-3153-1 Union Pacific 4-12-2 9000 Steam Engine w/Proto-Sound 3.0 Cab No. 9010 Item No. 80-3154-1 Union Pacific (O.S.L.) 4-12-2 9000 Steam Engine w/Proto-Sound 3.0 Cab No. 9503 Item No. 80-3155-1 Union Pacific (O.S.L.) 4-12-2 9000 Steam Engine w/Proto-Sound 3.0 Cab No. 9512 WHERE TO BUY The Union Pacific 4-12-2s can be ordered through any M.T.H. Authorized Retailer.