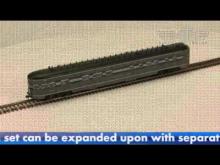 December 26, 2012 - M.T.H. HO New York Central 20th Century Limited Passenger Cars have begun shipping to M.T.H. Authorized Retailers. Available in a 5-car set configuration and in additional 2-car and single car add-ons, these cars make a great complement to the M.T.H. New York Central Dreyfuss Hudson shipped in 2009. Check out the car's details in the photos below or click on the video icon to the left to see it in action with the 20th Century Limited Hudson. While the Pennsy's rival Broadway Limited equaled the Twentieth Century's speed and accommodations, the Century was the clear winner in the public's eye, usually running in two sections to meet demand while the Broadway ran with empty seats. In styling the interiors for the 1938 Century, Henry Dreyfuss made frequent use of subdued blues and grays and leather seating - creating an elegant setting to complement the exciting clientele that frequented the Century, a favorite of movie and theatre people and businessmen on the rise. One highlight was the dual-purpose dining cars, whose white linens were replaced with rust-colored table cloths when the cars became the "Café Century" night club after dinner. The exterior styling of the cars, however, with blue, white, and gray striping, was soon perceived as too "busy." By 1940, the train had been repainted in an improved, slightly simpler scheme that eliminated the blue accents. M.T.H. is releasing both the 1938 and 1940 liveries. The 1940 scheme is delivering now with the '38s following in January 2013. Purchasers of either set will note that the passenger car stripes do not match up with the stripes on the M.T.H. Dreyfuss tenders M.T.H. produced back in 2009. Regrettably, the tender stripes did not follow the New York Central's painting protocols when we initially produced them. Given that the cars were designed to authentically replicate the 20th Century's real-life cars, we were unable to recreate the stripe width to match the incorrectly painted tenders produced in 2009. To resolve the mismatched stripes, M.T.H. will be providing - at no charge - a replacement and correctly striped tender shell for every customer who purchased the M.T.H. HO Dreyfuss Hudson produced in 2009. The tenders will be shipped to M.T.H. Authorized Retailers who purchased the locomotives either directly from M.T.H. or through an M.T.H. Authorized Distributor in late February/early March 2013. Each retailer will then deliver the replacement tender(s) to their customers.