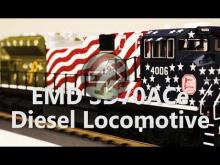 The SD70ACe is Electro-Motive Diesel's hope for the future. While designed to meet the Environmental Protection Agency's Tier-2 emissions requirements that took effect on January 1, 2005, this replacement for the SD70MAC also seems to have a higher purpose: to recapture the lead in North American locomotive sales that EMD lost to General Electric in 1987.

Other than the prime mover, however, virtually every element of the SD70ACe has been rethought to create a 21st-century locomotive. Ergonomics were a prime consideration. The engine's angular nose offers the crew far better visibility than most other locomotives, and the cab is comfortable for engineers of almost any size. Digital screens provide a range of information on what is happening both inside the locomotive and out on the road. The cab easily accommodates a crew of three - an important factor in a modern world without cabooses. And there is, of course, a cup holder for the engineer.

The RailKing Imperial SD70ACe is accurately decorated in modern motive power paint schemes. Our near-scale model is a full 17" in length, yet operates comfortably on O-31 curves. Under the hood is the same Proto-Sound 3.0 and control system found in our more expensive Premier model of this locomotive - complete with sounds recorded from an actual Union Pacific SD70ACe. Additional Imperial features include operating diesel exhaust smoke and flashing ditch lights. If you're looking for realism and a lot of fun at a RailKing price, it doesn't get any better than this!

IntelliTrain, an option on the SD70ACe, uses cellular and GPS technology to allow a railroad's maintenance department to monitor operating conditions and problems as they occur out on the road - making diagnosis and repair considerably easier.